All About Yu Sheng: History, Steps and Significance 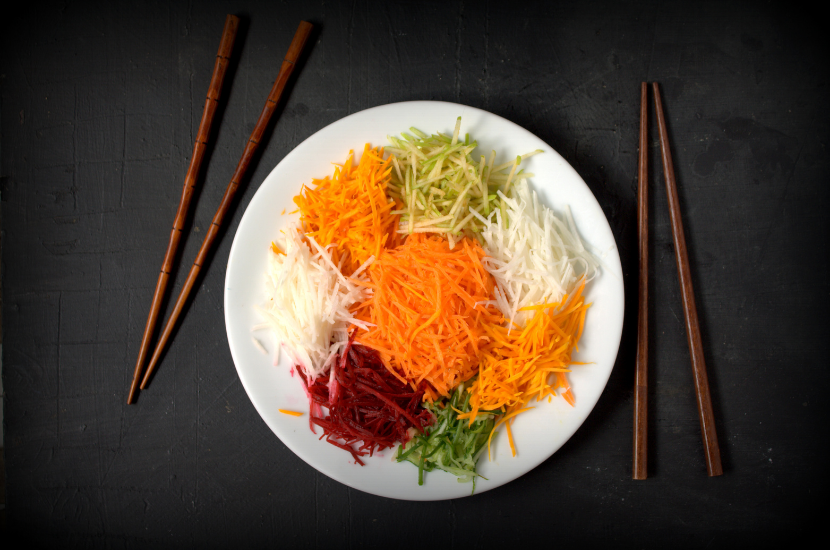 A Complete Guide to Yu Sheng

Families celebrate Chinese New Year in different ways, but there is one practice that we all have in common – that is having yusheng. This bright multi-coloured dish is something that we always have at the start of Chinese New Year meals and we are all guilty of whipping out our phones to snap pictures, but do we know the significance of eating yusheng? Let us find out more.

Yusheng is also known as lo hei, because lo hei means the “tossing up” in Cantonese. Hence, this dish is eaten to express tossing up fortune. Yusheng (鱼生) on the other hand, means an “increase of abundance”, as the word yu (鱼) sounds like yu (余) which means abundance and surpluses while the word sheng (生) sounds like sheng (升) which means to rise. Yusheng is made up of 11 ingredients, each of which have different auspicious meanings which are spoken as each item is added. When the dish is prepared, it is placed in the middle of the table and diners will toss the ingredients around to mix them while declaring some Chinese New Year greetings. It is said that the higher you toss the ingredients, the greater your blessings and fortunes lie ahead.

Yusheng started out as a raw fish salad with some vegetables and condiments for flavour. It was brought to Singapore by Teochew and Cantonese immigrants in the early 19th century. The Cantonese yusheng was eaten on the seventh day of the Lunar New Year by businessmen in hopes of having a year of good fortune. The yusheng during that time was made of thin slices of raw fish served with vegetables and a tangy sauce. The Teochew yusheng (also called husay), on the other hand, was served throughout the Spring Festival period. The dish consisted of sliced air-dried fish, sesame seeds, sweet-and-sour sauce, and sliced vegetables.

After the 1930s, variations of this yusheng came out. The Loong Yik Kee Restaurant introduced the yusheng with pickled vegetables, sugar, and vinegar. A Malaysian restaurant was opened at the Fook Hai building which served yusheng with a secret plum sauce. Thereafter, in 1964, four chefs also known as the “four heavenly Kings”: Lau Yoke Pui, Tham Yui Kai, Sin Leong and Hooi Kok Wai, came together to think about how to attract more customers to their restaurants. Their yusheng included many more ingredients such as white and green radish, pomelo, peanuts and more. They also thought to include auspicious sayings during the lo hei session. The improvement helped to improve the flavour, texture, appearance, and significance of the dish. This dish was first introduced at the Lai Wah restaurant and took two years before it was accepted by the public.

As mentioned earlier, each of the ingredients have a symbolic meaning to it. Here’s what each ingredient represents.

Here are the steps in sequence and the respective Chinese New Year blessings:

What it means: Wishing you happiness and prosperity

What it means: May you have abundance every year, as the Chinese word for fish is yu (鱼) which sounds like yu (余) which means abundance.

What it means: May you have luck and many gains or prosperity. This is because pomelos and lime resemble oranges and oranges in Chinese are called juzi which sounds like ji (吉). Ji means luck.

What it means: May wealth come in from everywhere

What it means: May your life be sweet and happy

What it means: May good luck come your way

What it means: May you have eternal youth

What it means: May every step you take lead you to higher position

What it means: May your whole house be filled with gold and silver

What it means: May your business prosper

What it means: May your floors be filled with gold

We hope that this article has given you a greater idea of the history behind yusheng and what it entails. We would like to wish you 新年快乐，年年有余! Huat ah!