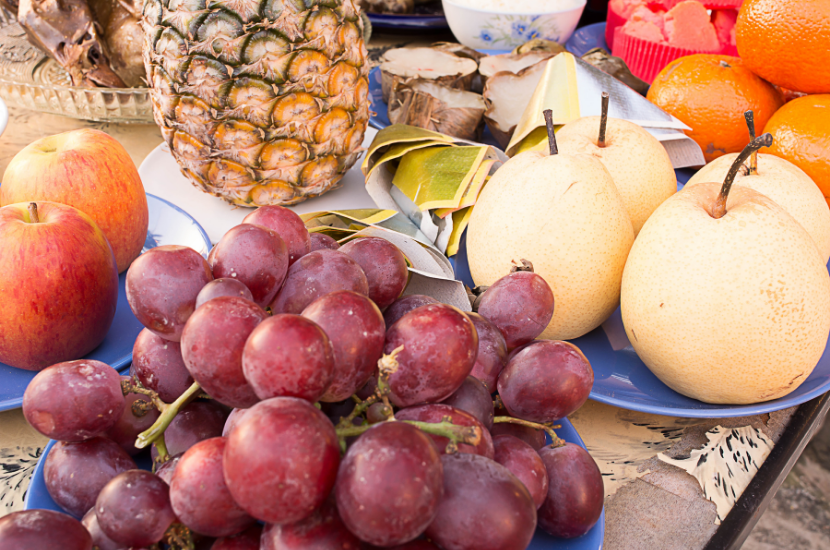 With Chinese New Year being round the corner, it is time to do your preparations to welcome guests or liven up your space. There’s no better and healthier way to add some colour and sweetness to your Chinese New Year dishes than adding fruits. However, what are some of the lucky fruits that are appropriate for the festivities? Read on to find out more.

Undoubtedly, mandarin oranges are at the top of this list. They are always presented to the homeowners during a house visit as they represent wealth and prosperity. This is due to their vibrant orange colour which looks like and represents gold. In addition, the Cantonese pronunciation of giving these oranges is song gam, which means giving gold. Hence giving your recipients a pair of mandarin oranges is equivalent to wishing them wealth and riches. They are given in a pair to double the blessings, which is called shuang xi (双喜) in Chinese.

There are many kinds of oranges unbeknownst to most people. Here are the different types of oranges explained.

They have a slightly lighter tinge of orange with a few wrinkles. As they have a thin skin, they are easier to peel. They are not as sweet as Ponkans and are a little smaller in size compared to them. However, the good ones can be quite sweet. 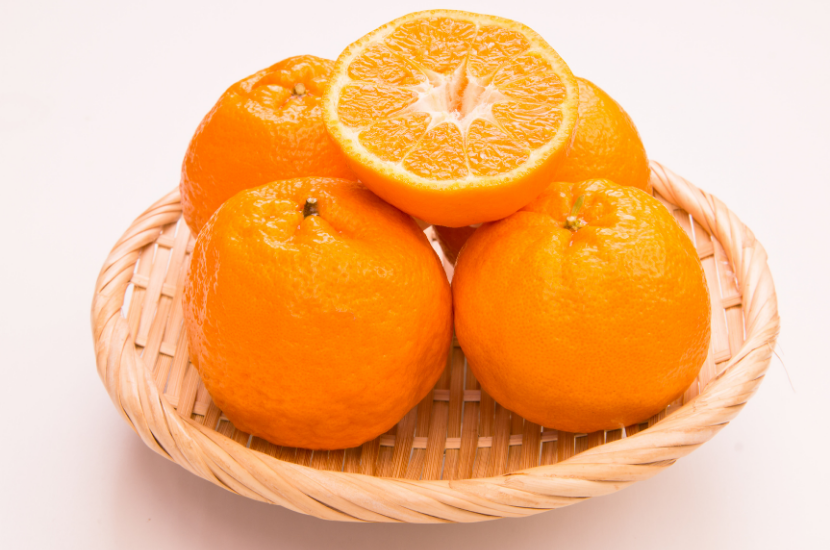 Ponkans are one of the juiciest oranges in this list. Appearance wise, they have a smooth texture with few wrinkles. They are also easy to peel.

As their name suggests, they originate from Shantou city in Guangdong, China. They are less sweet and have rougher and more wrinkled skin. They also have thick skin, which makes them harder to peel. However, they have a longer shelf life of two to three weeks and hence are suitable to be displayed as Chinese New Year decorations.

They are around seven to eight cm wide, and hail from Pakistan and India. Compared to other oranges, they have a flatter appearance, which means they look less like a sphere. As they are an orange-pomelo hybrid, they have a concentrated orange hue. They also have smooth and shiny skins. Taste-wise, they are sweet and have a rich, intense zest which makes them good for making drinks or for your bakes. 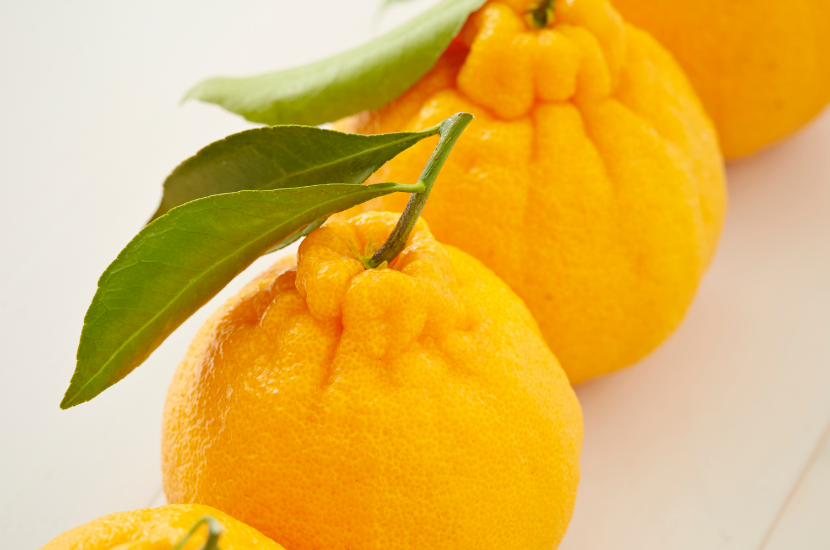 They are bigger than an orange but smaller than a grapefruit. They have a signature round bump on top. They are a hybrid of Kiyomi oranges and Ponkan oranges. The name is broken down into deko which means “bump” in Japanese and pon which comes from the Ponkan orange. They are sweet and rich in flavour, which also means that they have a high sugar content. They are seedless and easy to peel. 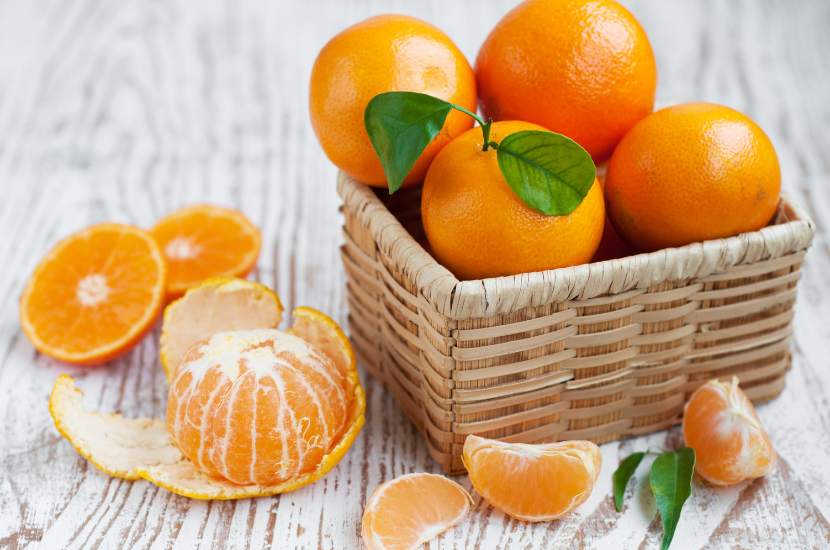 Often known as “baby oranges”, they are smaller, lighter, and slightly flatter than oranges. When ripe, they have a softer touch compared to oranges. They are also more reddish orange than yellow orange. Taste-wise, they are sweet with little aftertaste. Some of the tangerines are also presented with the stem and leaves attached, which implies wishing the recipient longevity and fertility.

Pomelos are another important fruit in this list. They are eaten during Chinese New Year as they are ripe around this time and they are also a symbol for family unity. In Chinese, pomelos are called you zi (柚子), where the you (柚) sounds like you (佑) which means “protect” in English. Hence, pomelos are thought to bring in good luck in the New Year. In addition, the word you also sounds like you (有) or you (又) which means “have” and “again” in English, respectively. This means that pomelos bring you wealth repeatedly.

Apples are called ping guo (苹果) in Chinese. The word ping (苹) sounds like another word ping (平), which means “peace”. Hence apples are auspicious fruits thought to bring peace and stability in life. The Chinese also like to give apples to one another during Chinese New Year as a sign of passing down good luck and prosperity.

Pineapples are also one of the mainstays, as we often consume them in the pastry form. In Hokkien, pineapples are pronounced as ong lai which means “prosperity”. The people in Fujian have a tradition of placing two pineapples in their homes for they represent wealth and prosperity. This symbolism also comes from their golden appearance which is an auspicious colour.

Sugar canes are commonly eaten in Southern China during Chinese New Year. This is because they resemble bamboos with their stem-ring appearance which represents an increase in status and an upgrade in life.

The pinkish fruit symbolizes wealth, plentitude, and good fortunes for the successive generations. They also symbolize longevity and make for great gifts for your friends to bless them with long life. Their flowers also make for beautiful decorations.

Lastly, we have pomegranates which represent prosperity, as the ruby-like seeds in them look like jewels and hence are a visual representation of wealth. They also represent fertility, as the abundance of the seeds means that there will be generations of sons and grandsons. Finally, pomegranates have an auspicious red colour and a vibrant hue which makes them a “lively” fruit to have this Chinese New Year.

All in all, fruits are a must-have to end your meals on a sweet note. In addition, they are a great way to spruce up and brighten your living spaces. We hope that this list has given you an idea of the different types of fruits and oranges available. We would like to wish you a happy and prosperous Chinese New Year!