Chinese New Year is a great time of feasting and bonding over food. It is a celebration of the New Year of the Chinese calendar. Chinese New Year falls on 12 February this year and to get you excited, here are some traditional food that are eaten during this festive season. 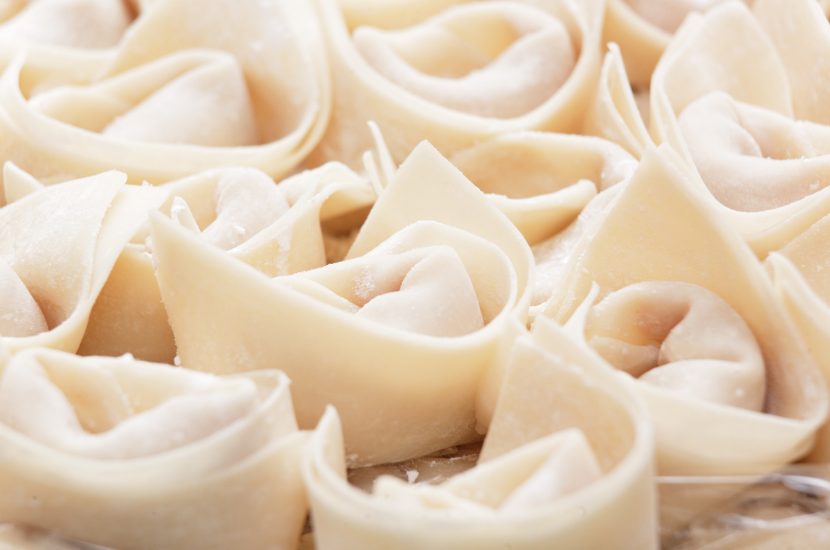 Known as jiaozi (饺子), dumplings are a New Year Eve’s tradition from 1800 years back. The Northern Chinese people eat dumplings as they look like ingots. Ingots (yuan bao) are oval-shaped and was the currency in the past, hence eating them is said to bring in new wealth and prosperity for the new year. It is also said that you can hide a coin inside the dumplings and whoever finds it will have the best luck and a good year.

The basic ingredients used are pork, green onions, and cabbage, but you can make the dumplings more scrumptious by adding shrimps, minced chicken, and beef. Families usually hand-wrap these dumplings until midnight as this represents wrapping or leaving the past year behind.

Meanings of the different dumpling fillings: 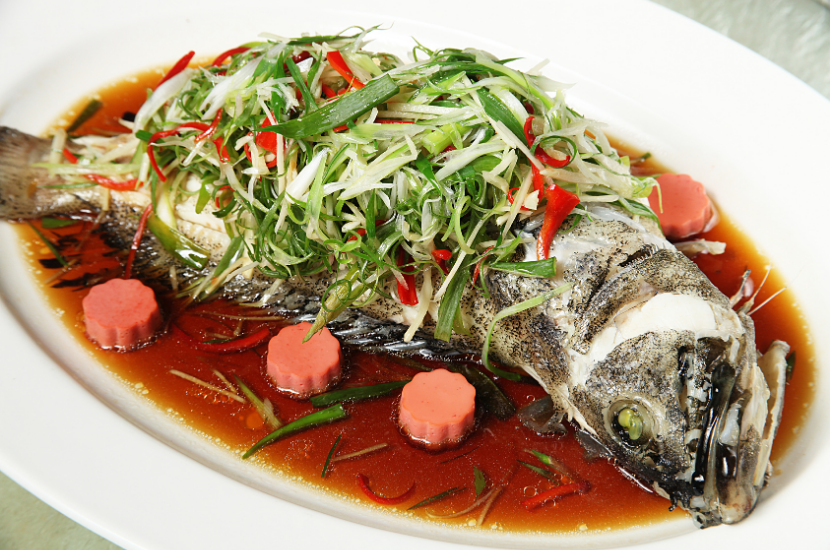 Fish is an essential dish eaten at the end of the meal. The significance of this dish is in the name for fish in Chinese, yu (鱼) which sounds like another word yu (余) which means abundance and surplus. This is also why people like to greet other with this blessing, nian nian you yu (年年有余) which means, “may you have prosperity and surpluses every year”.

Meanings of the different types of fish

The manner of eating fish

The head and tail of the fish should not be eaten but kept as leftovers to be eaten the next day. This is to signify that there is abundance of surpluses both in the old year and in the new year as well. The head and tail of the fish also represent a saying, you tou you wei (有头有尾), which means “for the things you have started, you must end it well and not do things half-heartedly”. The head of the fish should be positioned towards important guests or elders as it signifies respect. Diners must wait for the elder to pick the head of the fish before they can start consuming the fish.

The fish can be steamed with soya sauce, sweet and sour sauce, or vinegar sauce. You can also take a notch up on the spice level and add red peppers as the people in Hunan do. Red peppers are used as they have a burning sensation which signifies a thriving business, and they are also red, which is an auspicious colour. 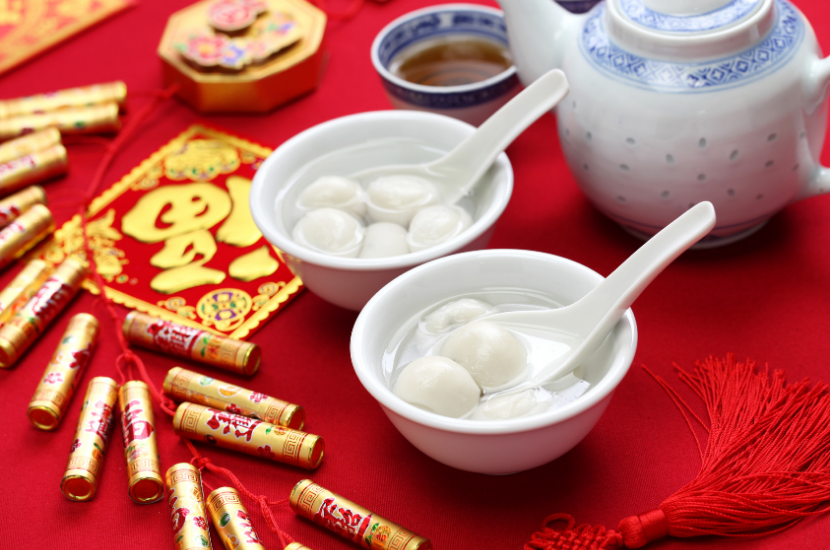 It is called tangyuan (汤圆) in Southern China, and yuanxiao (元宵) in Northern China. Glutinous rice ball is a main food item eaten during the Lantern Festival, known as Yuan Xiao Jie (元宵节) which takes place on the 15th day of Chinese New Year, which is the last day. People in the South also eat this during their Chinese New Year celebrations.

The name tangyuan sounds like tuanyuan (团圆) which means “reunion”. Chinese New Year is a time where family members reunite, gather, and eat together, hence having tangyuan encompasses that idea. Moreover, tangyuan has a circular shape and is served in a round bowl. These circular elements resonate with the Chinese as they view circles as representing harmony and cooperation. Hence, eating tangyuan is meaningful as it signifies unity and communion during Chinese New Year.

The mochi-like outer covering is made with glutinous rice flour, while the paste can be made up of red beans, sesame, or peanuts. In Southern China, they like to make the flour “skin” first, before adding the paste on it and wrapping it into a ball shape. On the other hand, people in North China like to make the paste into a ball and sift the flour onto the paste to coat it. The balls are then boiled in sugar water before they are served. 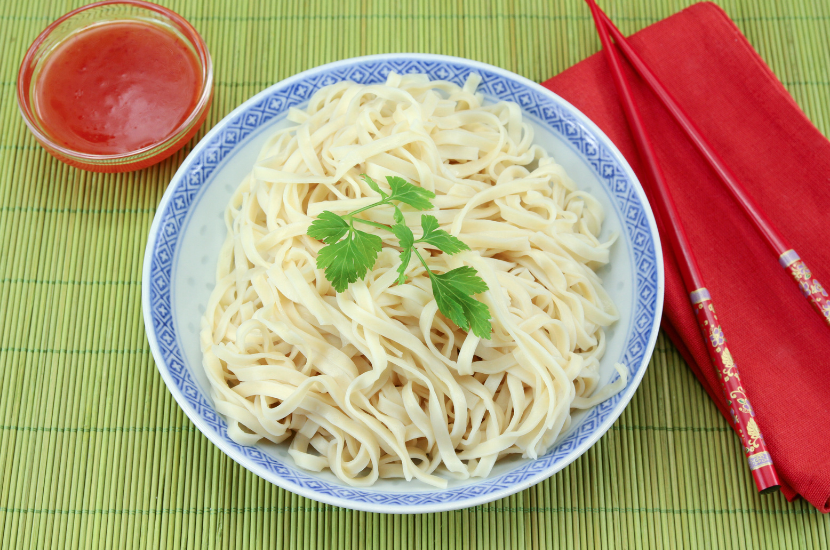 They are called changshoumian (长寿面) in Chinese, eaten by people in Northern China. The reason is because the long noodles represents long life and longevity. Thus, it is recommended that diners slurp the entire strand and not chew or break the noodles. 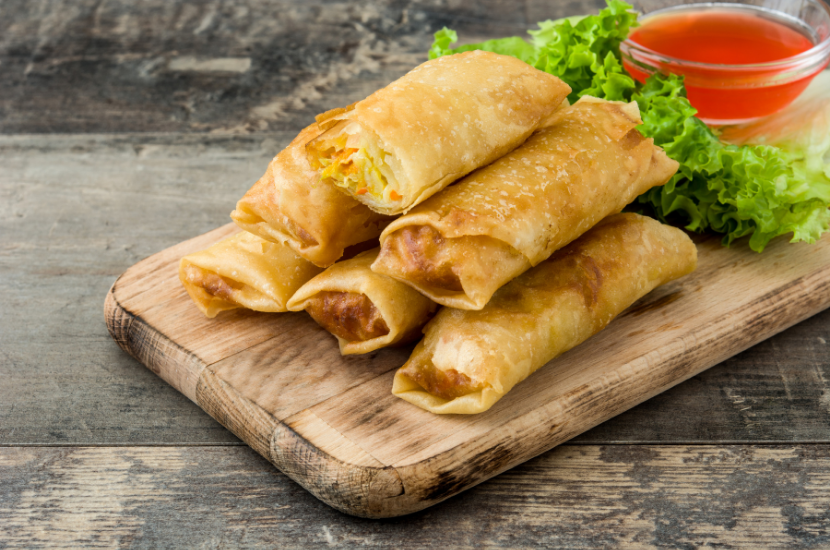 They are called chun juan (春卷) which literally means spring rolls. They are eaten during this Spring Festival because of the word “spring” in it and are popular in East China. Furthermore, spring rolls have a resemblance to gold bars, hence consuming spring rolls is thought to bring wealth and prosperity.

As for the ingredients, spring rolls can be stuffed with pork, shrimp, cabbage, carrots, and mushrooms although they were traditionally filled with vegetables. Thereafter, they are rolled up in a cylindrical shape and fried to give them their golden appearance. 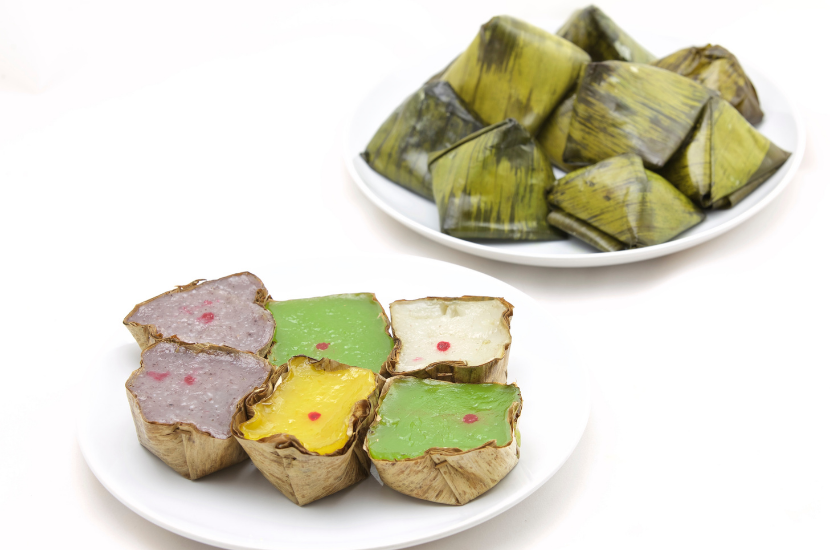 Nian Gao (年糕) is a lucky food eaten during Chinese New Year because of the word gao, which sounds like the word gao (高) for “high or tall”. Thus, it is consumed by people with hopes that every year they can rise in ranks, positions, and status.

It is made up of sticky rice, chestnuts, Chinese dates, sugar, and lotus leaves. You can find it everywhere in Chinatown’s Chinese New Year stalls. 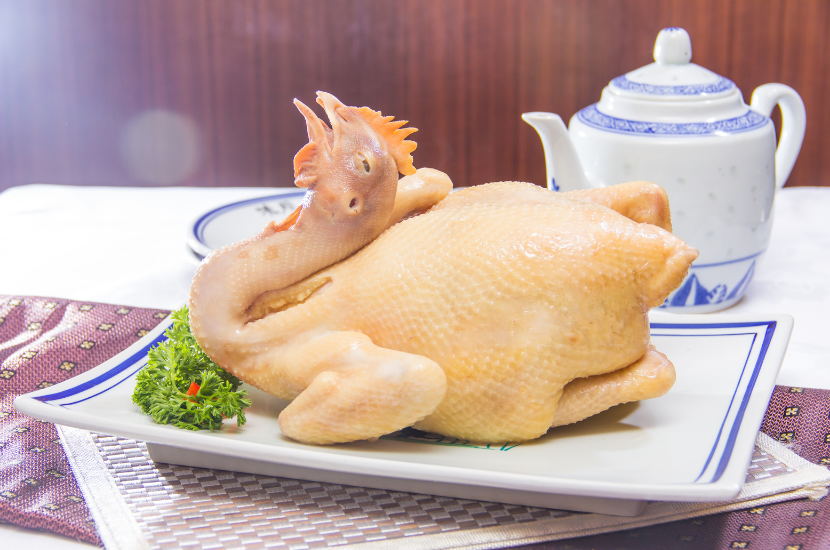 Chicken is another popular dish in Chinese New Year, since a whole chicken represents togetherness and family. It is also rich in protein, making it a nutritious dish to feed the entire family. The various parts of the chicken also have some significance. Consuming the wings of the chicken is said to enable you to go to greater heights, while consuming the bones represents achievement. The claws or feet of the chicken is reserved for the breadwinners of the family, for it is said to help them clutch on to success. The chicken can be steamed in ginger, yellow wine, or soya sauce.

The chicken also has some other uses. Some families present the chicken as offerings for ancestral worship and blessings. In Hubei, chicken soup is cooked during Chinese New Year in hopes for peace. Lastly, some give chicken eggs to bless others as it is an inexpensive gift option. 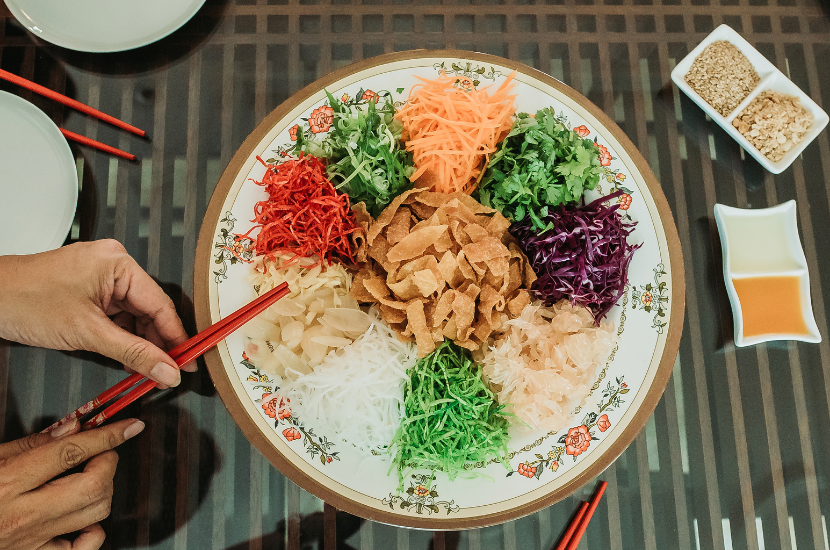 It started as a raw fish dish brought into Singapore by Cantonese and Teochew migrants in the late 19th century. The Cantonese word for “tossing up” is lo hei, which is why yu sheng is also called lo hei to express tossing up fortune. The yu sheng is made up of 11 ingredients, each of which have different auspicious meanings which are spoken as each item is added. When the dish is prepared, diners will toss the ingredients around to mix them while declaring some Chinese New Year greetings. It is said that the higher you toss, the greater your blessings and fortunes lie ahead. 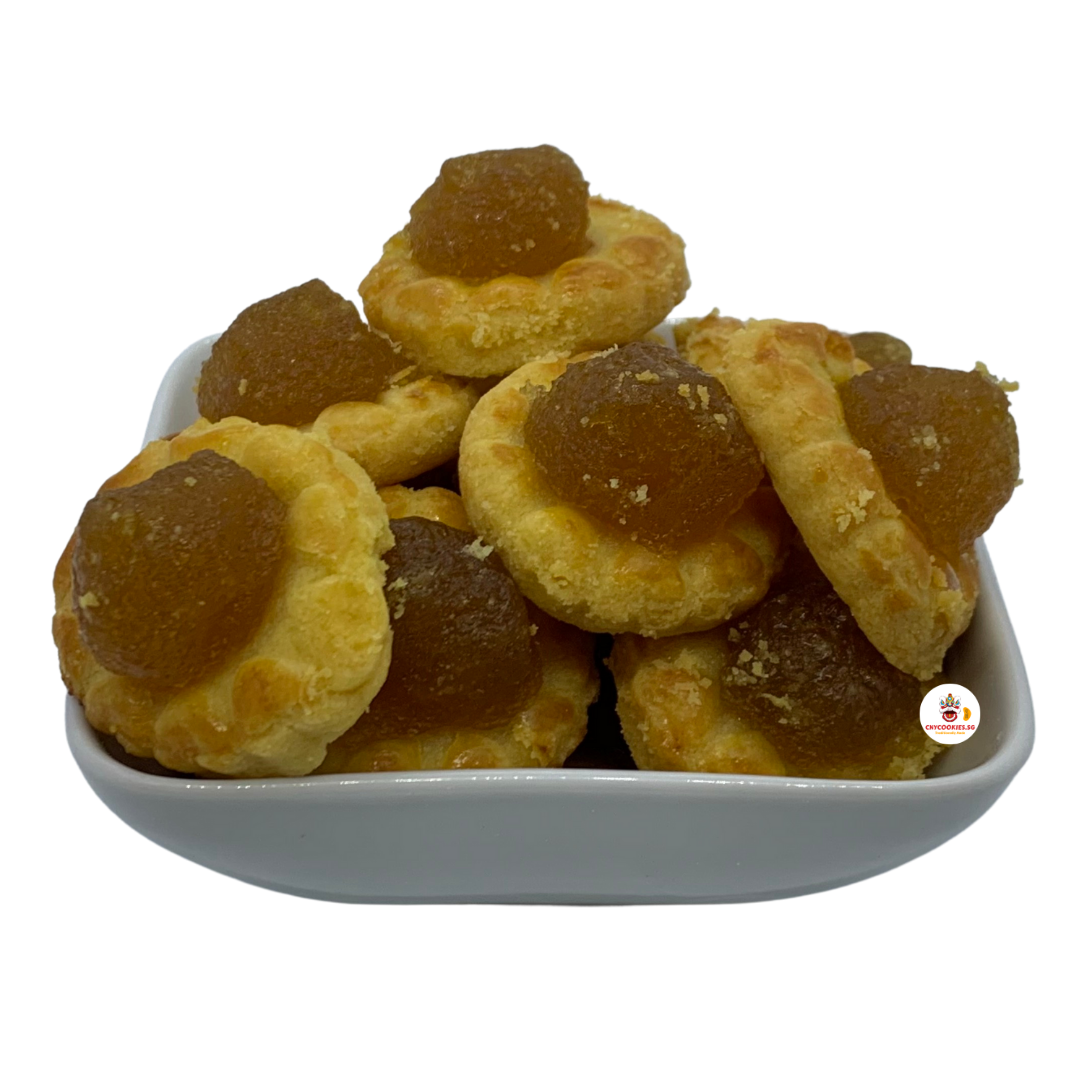 Finally, we have some desserts. Pineapples are not to be missed, as they are one of the most popular Chinese New Year goodies, because of their tastiness and significance. They are called ong lai in Hokkien and Cantonese, which means “prosperity come”. Pineapples represent wealth and prosperity, as they are golden in color. As a result, pineapple tarts are an essential in every home and they make a very good gift. Here at cnycookiesg, we offer the best buttery pineapple tarts that are guaranteed to satisfy your sweet tooth. Choose from our varieties of pineapple tarts, such as the Flower Blossom, the Golf Ball, and the Golden Pillow. You’ll come back wanting for more!

Food is an indispensable part of our lives. It is not only necessary for survival, but it is also the medium over which we form connections and show our love for one another through our cooking. We hope that this list of traditional food items is helpful for you in preparing your own festive meals. We wish you a very joyful and prosperous Chinese New Year. Huat ah!