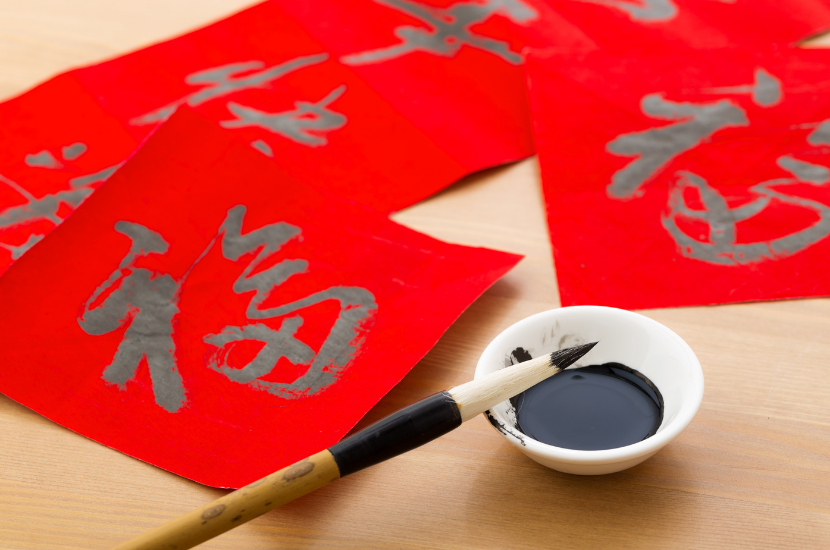 How To Decorate Your Homes For CNY: Ideas, Meanings and History

Get into the Chinese New Year festive mood by preparing your house with some decorations. Here are some ideas that you could use to liven up your living spaces.

Couplets are red banners with Chinese calligraphy on it, usually hung on the two sides of the door. They come in two as the Chinese think that even numbers are auspicious numbers. They are written using black ink on a red piece of paper and are often poems expressing the family’s wishes and hopes for the Chinese New Year. For the contents of the couplets, they are usually made up of seven characters, written neatly and uniformly across the two banners. One would be able to see the family’s desires by looking at the words on the couples, which normally reflect wishes for prosperity and peace. These couplets are normally pasted before New Year’s Eve and are only removed when the next New Year comes. Today, you may purchase couplets that are handwritten, or printed on cloth with decorative elements.

There was a legend that there were two guards who stood at the gate of the ghost world near a peach tree. They could block ghosts from harming humans and thus humans would inscribe the name of these two guards on a peach board. They did these as they thought it could ward off evil. In the Song dynasty (960- 1279 AD), people wrote lucky sayings on the wood instead of the guards’ names. This tradition became popular in the Ming dynasty (1368 – 1644 AD) and later, red paper was used instead of wood as red is an auspicious colour. 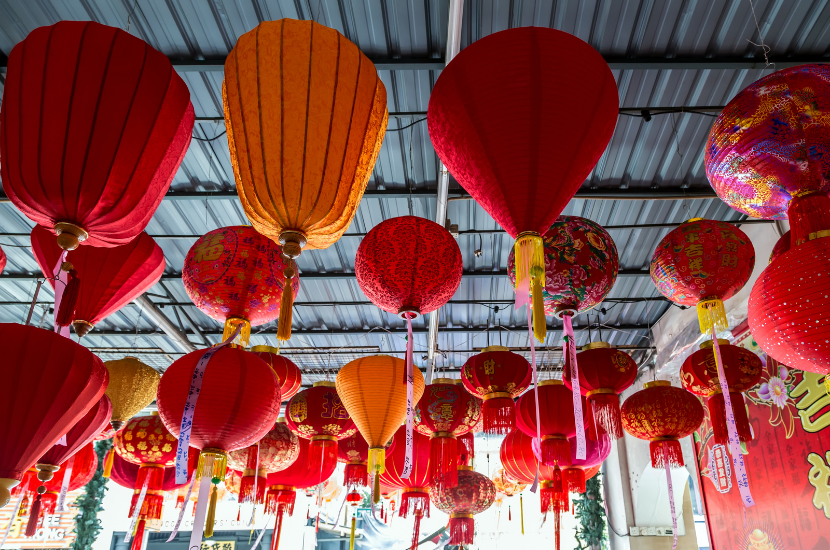 Chinese red lanterns are ubiquitous in Chinatown for they are beautiful decorations with much significance in the Chinese culture. It is said that in the Eastern Han dynasty, Emperor Liu Zhuang ordered the country to use lanterns to worship Buddha as he himself was Buddhist. Later on in the Tang dynasty, lanterns lighted all the streets as they were symbols of prosperity and represented the country as an affluent one. Hence, lanterns have been popularized and are now commonly used during Chinese New Year, the Lantern Festival and Mid-Autumn Festival. For Chinese New Year, red lanterns are used as they are thought to ward off bad luck and bring in wealth, prosperity and energy. Today’s lanterns come in all shapes, sizes and designs. Some even have LED bulbs inside them so that they can illuminate beautifully in the dark. If you wish to make a simple one using paper, you may find out how to make the lantern decoration here.

Decorations with the word fu (福) which stands for blessings can be pasted upside down on your cabinets, containers, or rubbish bins as they can help to keep your good luck inside. These decorations are hung upside down because “upside down” in Chinese is called dao fan (倒翻), whereby the dao here sounds like dao (到) which means arrived. Hence pasting this fu upside down means good luck and fortune has arrived. However, a misconception is that people should not paste the fu upside down on their doors or entrances, as this passage should be presentable since many people are passing through it. Hanging it upside down looks tardy and improper, hence you should leave it upright on your front doors.

Called nian hua (年画), they are paintings of mythsytilogical Gods and legendary figures. For instance, some of the most common figures include the God of Wealth which is deemed to be able to make a lot of money and the Door God which is deemed to be able to keep the house safe. Hence paintings are added for decoration purpose as well as for the wish of a prosperous and peaceful New Year.

The idea of paper cutting came from the sixth century where the women used gold or silver paper and cut them into a beautiful shape to be used as hair decorations while the men used them in rituals. Paper cuttings are usually delicate and intricately carved, which is what makes them so beautiful. Hence the Chinese like to paste them on doors and windows, especially those from Northern and Central China as they represent the people’s wishes for a good life. The images of the paper cuttings are diverse – they can be of that year’s zodiac animals, or of the auspicious characters such as fu, shou and xi which means “blessings”, “prosperity” and “happiness” respectively. They can also be of different animals and plants. For instance, the peony represents glory and prosperity, the pomegranate represents fertility, the peach represents longevity and a duck represents affection and fidelity. Now we can easily purchase paper cuttings online. However, should you want to make a simple one, we have a simple instruction of how to make a fu paper cutting here. 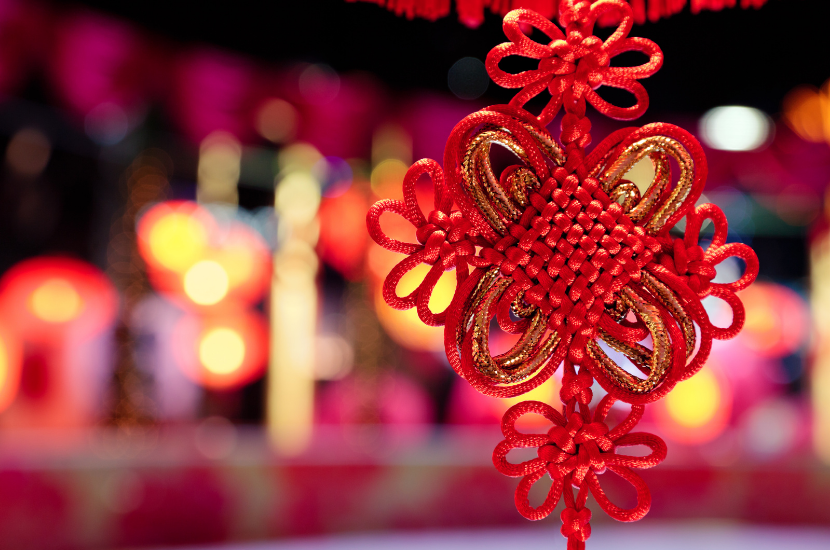 Chinese knots are made from a long rope and twisted to a variety of shapes and sizes. Most knots require two ropes for more complex designs and the bigger knots signify a larger event and vice versa. The knots have to be symmetrical as it symbolizes the Chinese’s principles of having balance and knots also represent connectedness and integration. They are used during Chinese New Year as a lucky charm to ward off evil and the word for knot is jie (结) which sounds like tuan jie (团结) which is reunification during Chinese New Year. Hence, Chinese knots are used during Chinese New Year. They also have a long history, starting in the Zhou dynasty (1046 – 256 BC) as a means for communication and conveying messages and later on was popularized in the Tang dynasty (618 – 907) as an art form.

These forms of decorations all have symbolic meanings and reflects the different desires and wishes of the people for the New Year. In addition to these decorations, you may also get flowers and plants to beautify your living spaces for a complete look. Not forgetting, some Chinese New Year cookies to satiate your appetite and to welcome guests this festive season. We would like to wish you 新年快乐，万事如意！